A County Antrim woman who was told she would have to wait 166 weeks to see an orthopaedic consultant has said she is shocked and distressed.

Sandra Condon, who is a nurse, said she is in chronic pain.

Mrs Condon said she could not believe that she would have to wait more than three years to be seen “and then potentially three to four years after that for surgery”.

“I honestly had to ask the girl to repeat that,” she said.

Her comments come after a report from the Nuffield Trust, an independent think tank, said that Northern Ireland’s political deadlock and a “top-down approach” are frustrating efforts to help sick people.

A patient in Northern Ireland is nearly 50 times as likely to be waiting over a year for care than one in Wales, the next worst performer, according to the report.

They show that children who may have a life-threatening allergy are being expected to wait 232 weeks to see a consultant. 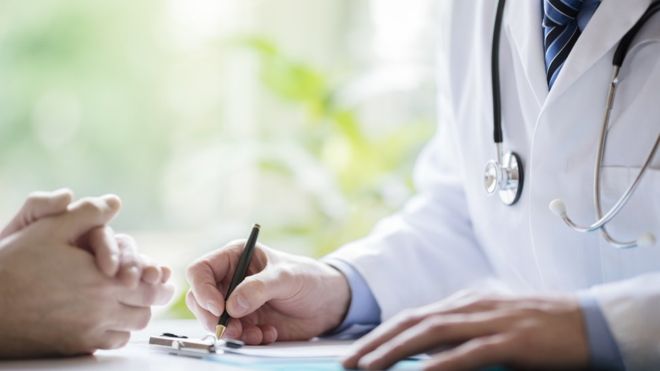 A Department of Health spokesperson said important progress had been made in transforming health and social care services in spite of political and budgetary uncertainty.

The hard-hitting Nuffield Trust report included information from clinicians and health service leaders from both inside and outside Northern Ireland.

On leadership, it highlights a culture of “tight command and control at the heart of the system”, with contributors suggesting a top-down approach does not allow for change.

It said the “political deadlock and culture of centralisation” are “impending reform”.

‘Grind to a halt’

It’s been three years since the Bengoa review, which outlined how to improve Northern Ireland’s health service.

Pace of change has been slow despite all political parties at Stormont signing up to the transformation of how services are delivered.

The Department of Health insisted much work was going on behind the scenes and that “significant investment” is required to address the waiting list backlog.

“The department cannot spend money it does not have,” it said.

The report’s co-author and Nuffield Trust policy analyst Mark Dayan said officials are committed to change but “to keep on pushing from the top risks making things worse”.

Mr Dayan said that without elected leaders “things grind to a halt because officials don’t have the legitimacy to make tough calls”.

She told the BBC that the waiting list figures are a “national scandal”.

People like Mrs Condon say they are forgotten about.

“We don’t have Stormont sitting at the moment so who is taking this forward? Who is fighting for the people who need to be seen?” she asked.

Commenting on Mrs Condon’s treatment, the Belfast Health Trust said that in most cases patients are seen in chronological order in terms of urgency but that if a specialist deems a referral “clinically urgent”, then patients will be seen within 10 weeks.

It said “demand to see a shoulder surgeon greatly outweighs” the trust’s capacity but that it had hired a specialist physiotherapist to run “clinics with shoulder surgeons” to increase capacity.

“We would like to take this opportunity to apologise again to the significant and growing numbers of patients who remain on the current waiting lists,” it added.

Grainne Doran, from the Royal College of GPs, said people are becoming accustomed to lengthy lists.

“We now need to step back and say we need to urgently get rid of the long lists and work out how we can stop them happening again,” she added.

Long waits are causing more people to go private, with demand so high that it has pushed two of Northern Ireland’s private hospitals into the top 20 busiest in the UK for dealing with joint surgery.

Kingsbridge Private Hospital is 9th while the Ulster Independent Clinic is 16th, in the National Joint Registry’s list of over 200 private hospitals.