Piles of washing up, trying to squash all your rubbish in one bin and sharing a bathroom is all part of living in a shared house.

But for people living with medical conditions these things can be more than a headache.

Amber Davies, 21, has a stoma after having her bowel removed after developing ulcerative colitis.

She loves living with her friends but worries about bin collections as there are strict rules in place.

With services varying across Wales and some councils fining residents who throw too much away, there are calls for greater support to make life easier for those with medical conditions living away from home.

“We only get one black bin every two weeks, and I am responsible for filling up most of that,” said product design student Amber, who changes her ostomy bag daily, but gets no extra allowance from Cardiff council despite living with three other people.

“To a shared house, one bin is not a lot at all, I know when I am back at home the council are a lot more lenient with what you are allowed, but here if the bin is open or over spilling then they won’t take any of it, that then leads to problems.”

A stoma is an opening in the stomach where faeces are collected in a bag after part or all of the bowel is removed due to a disease or obstruction.

Many people with ileostomies, where the large colon has been removed, have bags which can be emptied but need to be changed.

But while the number of stoma bags prescribed in Wales almost trebled in the last 18 years, how the used bags are collected differs depending on where you live.

Currently, six councils in Wales collect the bags in special absorbent hygiene collections, while the rest tell people to put the used appliances in household bins, collected about every two weeks.

It is not collected by the NHS as it is not classed as “clinical waste”, such as needles and infectious waste.

And rules differ for large households, with some areas allowing large families or people living in house shares to put out extra rubbish, while others have strict limits and can fine those who put out extra bags.

In Cardiff the council allows extra rubbish for people living in houses with six or more people, if they can prove they recycle properly. 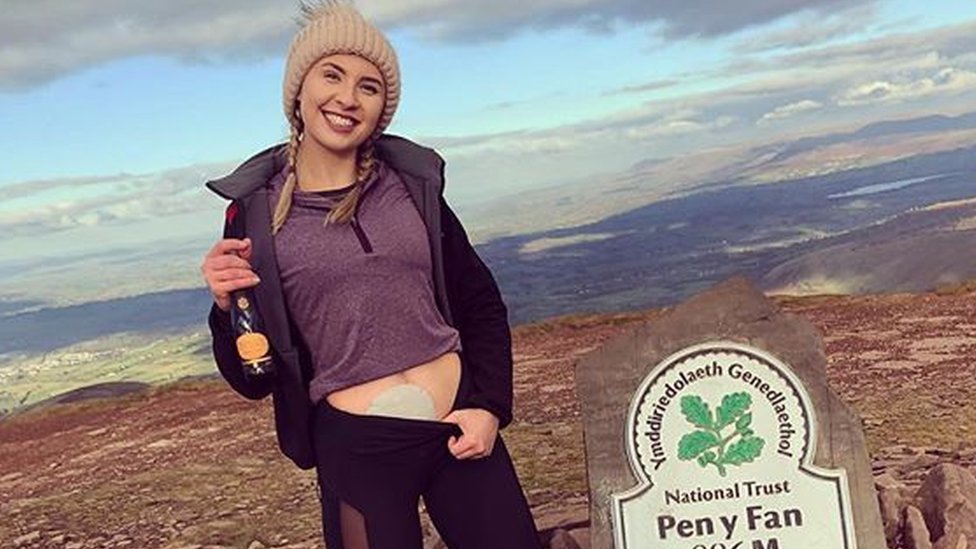 Having a stoma is a big thing to adapt to live with, but generally life since surgery is a lot better and I can do so much more.

Amber, from Builth Wells, Powys, was diagnosed with ulcerative colitis – one of the main forms of Inflammatory Bowel Disease (IBD) – when she was 13.

After years of trying medications and being in and out of hospital, when she was 17 she had emergency surgery to remove part of her diseased large bowel, leaving her with a stoma.

Not long after her second operation – which removed the rest of her colon leaving her with a permanent bag – she moved away from home for the first time to go to Cardiff Metropolitan University.

Amber moved into a house with eight other students.

“It was quite daunting to start, but I am quite open and honest with people about my disease and my bag, so I made sure everyone I lived with was in the know,” she said.

Now in her second year, she lives in a house share with three of the girls who know everything about her illness.

Loving life since her surgery, she has jumped out of a plane, is training for a half marathon, and even does swimwear shoots and is a role model on Instagram for others who need or have an ostomy to break down barriers.

But she still worries about filling up the bin with her used bags, which she changes every day, or has to change if they leak, as they only get one bin collection every two weeks

Amber said it would be really hard if she was not so open about her condition.

“For some people it could pose really big problems, but I have always been honest from day dot with the people I live with, which has made it easier,” she said.

Wayne Lewis, project manager for Crohn’s and Colitis UK in Wales, said the challenges of living with a stoma were different for each person and that more support was needed to help people.

“If you are a student and you are moving away, you are getting to know who you are, you are trying to make new friends, and you don’t want to stand out from the crowd,” he said.

“If you’ve got a stoma and you’ve got to dispose of the waste, that’s a difficult thing at that age to come to terms with sometimes.”

“Many councils have relaxations or exemptions available to cater for residents with specific medical needs,” a spokesman said.

A Cardiff council spokesman said if anybody living in a shared house was struggling with full bins, they could request a larger one.

“We will then come out to do an assessment to come up with a solution,” a spokesman added.