Time is not on Duane Oates’ side. His body is being slowly poisoned.

Three years ago he found out that his kidneys had begun to shut down. Now, most days the 56-year-old spends hours hooked up to a dialysis machine that removes excess fluid and waste building up inside him.

Although doctors refer to dialysis as “kidney replacement therapy”, it is a stopgap at best. The machine does only 15% of the job of a normal kidney. “What’s going on with the other 85% [kidney functions] I’m not getting?” Oates asks, sitting in a medical recliner at a clinic near Washington DC. “Every day that I’m on dialysis my body is getting less healthy.”

What he needs is a new kidney that filters his blood around the clock. As his specialist doctor Ashté Collins puts it: “The optimal kidney replacement therapy is a transplant.”

The problem is that the US, like nearly every country, is experiencing a permanent shortage of donors. Oates is healthy enough for a kidney transplant, but only 22,000 are performed in the US every year. There are 100,000 people in the queue.

The shortage is particularly acute in big cities, where the wait can last as long as 10 years. Meanwhile, as toxins continue to collect in patients’ bodies, they face increasing risks of heart disease and stroke.

The scale of the crisis in the US – which spends more on kidney care and carries out more transplants than any other nation – is startling. Kidney disease affects one in seven adults. 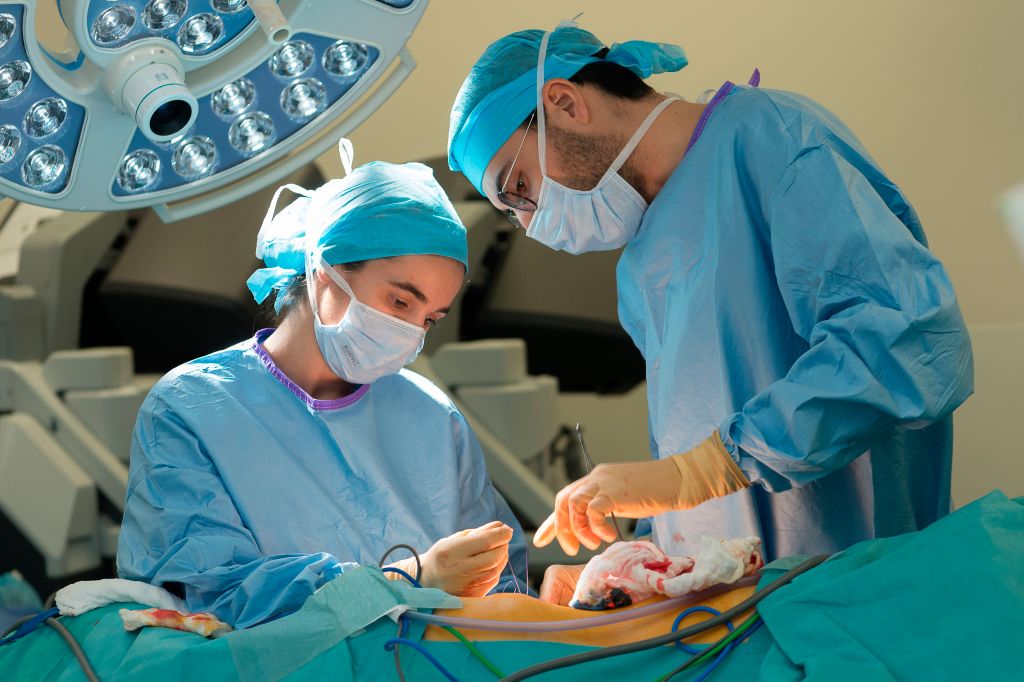 Because of a genetic mutation, African-Americans are three times more likely than whites to develop full-blown failure. Oates is a case in point – his kidney stopped function as a result of “focal segmental glomerulosclerosis”, a condition that disproportionately affects black people.

Even for someone who is still relatively healthy like Oates, dialysis carries a heavy toll. He used to work as a project manager in the construction industry. Although he tries to keep active, having your blood filtered four mornings a week makes it impossible to hold down a job.

“When you first get hit with it, you’re kind of in a dark place. But you’ve got to fight through it and not allow it to take over you.”

This is a struggle many patients lose. “Being bored is the kiss of death,” says Towanda Maker, the clinic’s formidable director. “It leads to depression, which is the number-one mental illness for dialysis patients.”

Dialysis does not have to be done in a clinic. Many patients are given machines that allow them to dialyse more efficiently from the comfort of their homes. But despite Ms Maker’s friendly nagging, Oates does not feel quite ready for self-care, which requires sticking thick needles into his veins.

Dialysis in any form can only do so much. Rather than languish for years on the transplant list, Oates has decided to take action.

He has joined a programme sponsored by the National Kidney Foundation, “Big Ask, Big Give”, that provides tips on how to ask people if they have a kidney to spare – after all, we all have two but only need one.

Some of Ms Maker’s patients have devised their own strategies. One put out a successful appeal on Facebook. Some have had “I need a kidney” T-shirts made with their contact information on the back. “People have gotten very creative,” she says.

Another innovative way of increasing your chances of finding a donor is through kidney exchanges – where a donor and recipient who are not compatible can find another non-matching pair for mutual benefit.

Such initiatives can help individuals, but they will not resolve the underlying problem: not enough kidneys are available for transplant.

Many countries, notably in continental Europe, have tried boosting the supply of dead donors through a “presumed consent” approach. Such a system, also known as “opt out”, automatically places people on a national register of donors unless they choose not to be.

All US states, by contrast, have “opt-in” laws. Would switching to “opt out” make a big difference? International studies suggest not. Spain, which has presumed consent, is only slightly ahead of the US in the number of transplants relative to its population; France and Belgium, with similar legislation in place, have fewer transplants.

Wales is currently the only part of the UK with an opt-out system – England is due to follow suit later this year. But the Welsh did not see an increase in organ donations after it changed its law in 2015.

A similar system in the US may help only a bit, Dr Melancon of George Washington University hospital reckons. “We would still fall short if we had presumed consent,” he says.

According to Joseph Vassalotti, the National Kidney Foundation’s chief medical officer, one way to make the most from dead donors is by improving the “discard rate”. About a fifth of the kidneys they provide are deemed unhealthy and thrown away.

If the US followed French policy and accepted kidneys from older patients and diabetics, for example, there could be 17,000 extra kidneys available for transplant, says Dr Vassalotti.

There is a wide consensus, however, that the surest way to substantially alleviate the shortage of kidneys is through an increase in living donors. But there is fierce disagreement on how to achieve this.

One prominent contributor to the debate is Sally Satel. A scholar at the American Enterprise Institute (AEI), a Washington think tank, she has an intense personal interest in the subject. In 2004, her kidneys started to fail. She was desperate to avoid dialysis, but as an only child with no immediate family nearby, she wasn’t sure how to find a donor. Her quest consisted in mainly mentioning her condition to those around her.

“I never asked anybody outright,” Satel recalls, sitting in the hushed foyer of the AEI. “I just brought it up. I don’t know what I was thinking. I just sort of assumed it would happen.”

Several friends did offer their kidney but pulled out – on two occasions after their spouses threatened divorce if the donations went ahead. By 2006, Satel’s health was deteriorating rapidly. She was weeks away from dialysis when the hoped-for miracle happened.

Virginia Postrel, a political writer, heard about Satel’s predicament while making small talk at a party. Postrel went home, did some research about donating kidneys and emailed Satel saying she could have one of hers.

The message, entitled “a serious offer”, was immediately followed by a second, single-line email that read: “I won’t back out.” Fourteen years after she became America’s most famous kidney donor, Postrel demurs at any suggestion that her decision was admirable.

“I always call it the world’s easiest good deed,” she says. “You show up, you get anaesthesia, you wake up. There’s very little you have to do afterwards. People do more extraordinary things every day, in terms of taking care of ageing parents.”

The intensity in her voice suggests it’s not false modesty. “The traditional journalistic narrative of ‘Oh the hero blah blah blah’ – I think it makes it less likely that people will donate. It needs to be normalised.”

Postrel’s kidney lasted Satel 10 years. By the time her immune system rejected it, aged 60, she had found another donor. Satel is now on her third right kidney and is feeling fine.

She was fortunate – twice. But as a policy expert the experience left Satel deeply dissatisfied with a system that relies on luck and the kindness of strangers. The reason so few kidneys are available for transplant, she contends, is that under the National Organ Transplant Act of 1984, paying for organs is illegal.

The US is not exceptional – Iran is the only country that allows such transactions and it has no kidney shortage. Satel is not advocating an Iranian-style market for body parts. But she believes that well-designed financial incentives can extend the pool of donors while addressing concerns over paying cash for organs.

“They’re afraid people will rush in to do this not knowing what they’re doing because the rewards are so appealing,” she says. “There are a million ways to approach that.”

A 2017 paper co-written by Satel outlines safeguards such as built-in waiting period and delayed compensation. A payment of, say, $50,000 could take the form of tax-credit spread over 10 years, school vouchers, or other long-term government benefit.

Her ideas are fiercely resisted by those who want to maintain donations on a purely charitable basis. One common objection, outlined in this Los Angeles Times piece, is that financial incentives would crowd out altruistic giving.

Satel rejects that notion as illogical and argues that financial incentives would not just improve the length and quality of life for kidney patients, but also save a huge amount of money. Half a million Americans are on dialysis, and caring for each one costs $100,000 (£77,000) a year. Medicare, the US federal programme that picks up most of the bill, spends 7% of its budget on it, while dialysis patients account for just 1% of its recipients.

If you add disability benefits and tax forgone, the costs of dialysis dwarf those of transplantation and post-transplant care.

Studies have tried to quantify the benefits US society would derive from various levels of compensation. One paper found that that offering $45,000 for every donated kidney would result in a net gain of $46bn for America as a whole, through lower medical costs and patients living more normal working lives.

Polls have suggested that a majority of US voters would favour non-cash payments for organs if this saves lives. But those who want to keep donations on a purely charitable basis take a dim view of such calculations and stand on principle.

The National Kidney Foundation (NKF) – a powerful voice in shaping public policy in the field -opposes any radical review of the 1984 ban. “Any attempt to assign a monetary value to the human body,” it says, risks “devaluating the very human life we seek to save”.

Many contributors to bioethics – the study of the rights and wrongs of medical research – also regard financial incentives as potentially exploitative. David Gortler, a former Federal Drug Administration official and onetime member of Yale University’s Center for bioethics, is concerned that people could make reckless decisions because they need the money.

“I have no confidence that people are going to spend [any tax credit] any more intelligently than a teenager with a blank check,” he says.

Deep-seated misgivings about paying donors mean that the 1984 law will not face a frontal challenge anytime soon.

A number of US states are now providing tax breaks worth up to $10,000 to cover the costs of donating organs – such as travel, accommodation and lost wages. But such measures may have limited impact, as research suggests the total value of the disincentives faced by donors is much higher.

There have been federal moves to tweak the 1984 act, but they are unlikely to go very far either. A bill to study the effect of non-cash compensation on the organ supply has been stuck in Congress since 2016.

Things may change in due course, but not fast enough for Duane Oates. He is pinning his hopes of finding a kidney not on politicians, but on the inner strength he derives from his family and his god. “You can allow things to pull you down and go crawl underneath a rock, or you can make something else happen for yourself,” he says.

“The wind underneath my wing is my daughter and my wife. When it seems I’m getting depressed I think about them, and I come out of it. We’re strong on faith belief.”

Have you donated or received a kidney? Should donors be compensated? Share your experiences by emailing haveyoursay@bbc.co.uk.

Please include a contact number if you are willing to speak to a BBC journalist. You can also contact us in the following ways: