A mother who took her severely ill child to the Netherlands for cannabis oil treatment says she is now trapped living abroad.

Julie Galloway left Scotland with seven-year-old Alexa, who has epilepsy and a rare neurological condition, almost a year ago to live with relatives in Rotterdam.

She says she is still living out of a suitcase and her savings are almost gone – but she fears that returning home without the medication would put her daughter’s life in danger.

Julie, from Cumbernauld in North Lanarkshire, said: “I feel like a refugee forced to live abroad to save my child.

“I have no other option. I miss my family. My mother and my sister are in Scotland – but my child comes first.

“I want to come home but I am terrified the medication will be confiscated. I am struggling to pay for it and I know this can’t go on forever.”

A version of cannabis oil has been approved for use in the UK, but doctors have been unwilling to prescribe it for Alexa.

Medicinal cannabis is currently unlicensed so doctors can prescribe it only if a patient has a need that can’t be met by licensed medicines.

Julie, 49, told the BBC Scotland news website that she decided to travel to the Netherlands last July to seek the treatment after watching her daughter deteriorate for six months.

She explained: “Alexa was diagnosed with epilepsy at the age of five. She also suffers from a rare neurological condition called Rett Syndrome.

“She was having seizures at home but then ended up in hospital.”

What are the rules in the UK?

The prescribing of cannabis-derived medicines has been allowed in Scotland, England and Wales since 1 November 2018.

However, medicinal cannabis is currently unlicensed – so it can only be prescribed if a patient has a need that cannot be met by licensed medicines.

It cannot be prescribed by GPs. This has to be done by a specialist consultant, for example in neurology or paediatrics.

One of the arguments against the use of the medication is that there have not been satisfactory drug trials to prove its safety and effectiveness.

As a result, it is rarely prescribed.

“I witnessed her lose basic skills – such as standing and drinking from a cup as well as walking – within weeks of being in hospital,” she said.

“I knew the medication wasn’t working but doctors kept her on it anyway despite her still having daily seizures.”

Alexa was frequently taking rescue medication which was designed for occasional use. This suppressed her breathing and caused respiratory distress.

Julie did some research and heard that cannabis oil was being used by other children with epilepsy and Rett Syndrome.

‘Showing interest in the world again’

However, she was unable to find a British doctor who could prescribe medical cannabis oil, so Julie and Alexa left for the Netherlands, where they are staying with family.

Alexa was taken to hospital after suffering a cluster of seizures. A doctor stopped her medication last November and prescribed cannabis oil.

According to Julie, within a week Alexa “started to show interest in the world again”.

Now, living out of a suitcase in Rotterdam, Julie is trying to fundraise to afford the cannabis medication.

She only managed to raise £300 – enough for one bottle – through her Alexas Hope Facebook fundraiser.

She is calling for the NHS in Scotland to give cannabis prescriptions to children who need them.

She said: “Before, Alexa was having seizures of 20 minutes, where she needed oxygen and turned blue, needed hospitalised, and I thought she might die.

“Now they last about 20 seconds. They have dropped in frequency by about 60-70%.

She added: “She has been on it for few months now and is slowly healing. She can drink from a cup again, and can stand and take a few steps.

“Cannabis is not a miracle cure, but it is certainly giving my child and me a better quality of life.

“We have some kind of normality when before we were walking on eggshells just waiting for the next seizure.”

However, Julie said her savings were almost gone after paying £400 a month for the treatment. 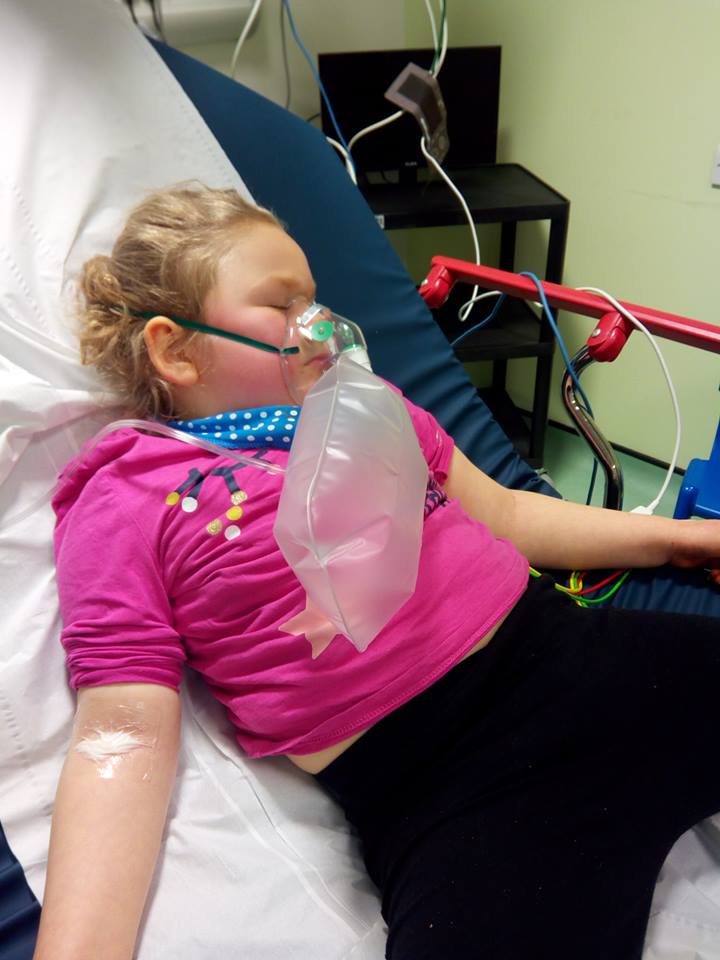 She cannot work because she is caring full-time for Alexa, and knows she will be unable to afford the medication in the long-term.

Julie said that if she could get Alexa’s condition stabilised in the coming months, she wants to return to Scotland to join the campaign to get the NHS to prescribe cannabis oil.

But she said she could not return to their previous existence.

‘I would do anything’

“I could never go back to that – worrying she might die during every seizure.

“I would beg on the street to pay for her medication. I would do anything to help my child.”

A Scottish government spokeswoman said: “We appreciate that watching any loved one suffer is heart-breaking, even more so when it is a child.

“The scheduling of cannabis-based products for medicinal use is reserved to the UK government and we welcome their recent decision to reschedule them, allowing specialist doctors on the GMC specialist register to prescribe such products where appropriate.

“We have issued guidance to clinicians, setting out what the regulatory change means in practice.”

She added that the prescription of medication was a clinical decision.

Coming up: Can Cannabis Save My Child? BBC Scotland’s Disclosure follows two Scottish mums smuggling prescription cannabis into the country to give to their seriously ill sons.